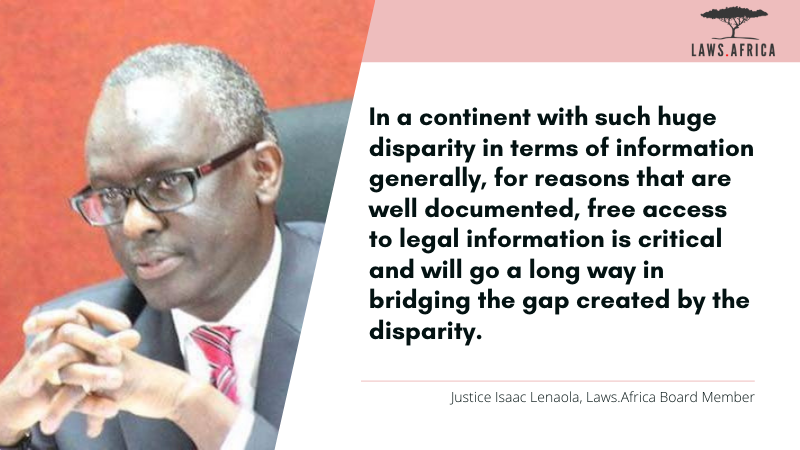 The four members of the Laws.Africa advisory board support the organisation through guidance and expertise.

One of our board members is Justice Isaac Lenaola, a Justice of the Supreme Court of Kenya. Following a successful career at the Kenyan bar, he joined the judicial service in 2003 and worked as Resident Judge in several seats of the High Court of Kenya. Until his appointment as Judge of the Supreme Court, Judge Lenaola was the Presiding Judge of the Constitutional and Human Rights Division at the High Court in Milimani, Nairobi.

In this Q&A, Justice Lenaola explains why he joined the Laws.Africa advisory board and his belief in access to African legal information.

Why is free access to African legal information important?

In a continent with such huge disparity in terms of information generally, for reasons that are well documented, free access to legal information is critical and will go a long way in bridging the gap created by the disparity.

Why do you support Laws.Africa?

Upon being introduced to Laws.Africa, I noted that its mission aligns with my own in terms of ensuring access to legal information to as many people in Africa as can be reached, and to use technology to its maximum in doing so.

Are you seeing any trends that makes Laws.Africa’s work more important?

Kenya and Rwanda, for example, as well as South Africa have a far more enhanced reach in terms of access to legal information. Laws.Africa can be the link with other less advanced countries and it is poised to play that critical role if its strategic plans and engagements achieve fruition.

You can read more about Justice Lenaola, and our other advisory board members, on our About Us page.