Laws can be messy, but they don't have to be 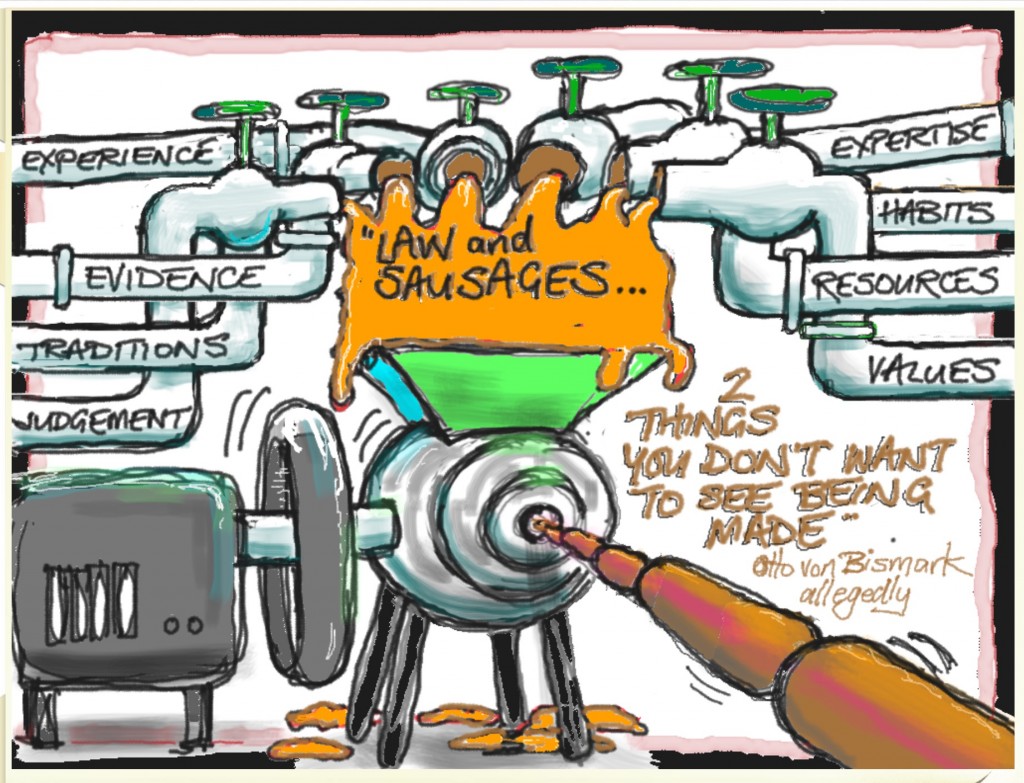 Laws are like sausages, it is better not to see them being made.

Laws are like sausages, it is better not to see them being made. We knew at the outset of the Laws.Africa journey that we would have an opportunity to reference Chancellor Otto von Bismarck’s (but more likely, John Godfrey Saxe’s) views on legislation. While the politics of legislation-making may have benefitted from the obscurity of the process, it is well accepted today that knowledge of the law (including how it is made) is a cornerstone of the rule of law - the transparency of the process increases respect for the law.

Laws.Africa’s work digitizing and consolidating legislation is a complicated process. It can be as messy as sausage-making too. That is why it is very important for us to shed light on every step of the editorial process - document assent, publication, commencement and amendment dates, link them to the gazettes of record, officially documenting these events in the lifecycle of legislation. Our recent interactions with Western Cape Provincial legislation reaffirm the importance of this approach.

One of our new projects this year is the addition of Western Cape provincial legislation. A team of dedicated researchers reviews all gazettes published by the Province and records new and amending enactments as well as any notices giving legal force to legislation. The platform flags legislation as uncommenced unless a gazette is attached as a verification document for the event.

Inconsistencies in promulgated final legislation are not rare. They are usually of a technical nature and can mostly be dealt with using editorial notes. We were surprised when the lead researcher discovered that an important piece of Western Cape legislation, the Petitions Act No. 3 of 2006, had seemingly never commenced. All Western Cape Provincial gazettes published since 2006 were double-checked, but no commencement notice from the office of the Premier for this legislation was found. Regulations had been duly enacted: the Western Cape Petitions Regulations, 2010 were proclaimed with Provincial Notice 232 of 2010 in Provincial Gazette no. 6755, 31 May 2010. The Petitions page on the Western Cape Provincial Parliament’s website accepted petitions in terms of this legislative framework.

We decided to write to the Secretary of the Western Cape provincial legislature to seek clarity. Mr. Romeo Adams responded with an acknowledgement within two hours of receipt of our letter. Mr. André le Roux, Senior Legal Adviser for the provincial parliament, responded on the first working day following receipt of our letter. He confirmed our findings. Mr. le Roux assured us that the Western Cape Provincial Parliament would consider how to resolve this unwanted situation. Most importantly, he clarified that in the meantime, section 115(d) of the Constitution of South Africa continues to empower the legislature and its committees to receive petitions, representations and submissions from interested persons or institutions.

Laws.Africa is impressed by the speed and efficiency of our Western Cape Provincial legislature. However, this story proves that even the most efficient of our government institutions can sometimes get tripped up by the messy business of legislation. Digital legislative drafting systems, coupled with interlinked (and interoperable) gazette databases, smart analytics and reports, can go a long way to eliminating inconsistencies and inefficiencies of analogue legislation-making processes.

The Laws.Africa platform enforces quality of legislation consolidation by incorporating provenance, verification and strict reliance on the government gazette as the source of public record. This cloud-based legislation platform can help navigate the complexities of the legislation drafting processes.

Please get in touch with us with your ideas on how legislation data might support your work.